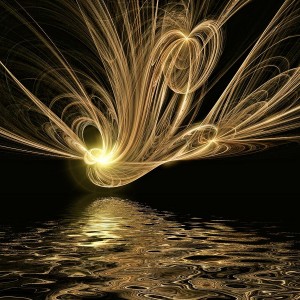 As we moved through December, the Season of Light, there are traditions that remind us that no matter how dark it may appear, Light is and will always be present. Early man watched as the days grew shorter and had no way of knowing whether it would continue to become darker until life would simply cease to exist. The celebration of the Sun returning to ‘triumph ‘ over the dark has been continuous for thousands of years and can be found in almost all cultures. In old Europe, it was known as Yule, from the Norse, Jul, meaning wheel. In Roman culture it was called Saturnalia. Eventually the Catholic Church adopted the time of year as the birthday of Christ in one of many attempts to blend pagan rituals with tenets of the church expecting the ‘old ways’ to fall away.

“By the blessings of the Winter goddess, by the blessing of The Oak King, may the rising light of the Sun be in our hearts as it is in the world. May our strength grow with it, from good to good and gain to gain, throughout the turning year. All hail the reborn Sun” A solstice Blessing

Many are realizing the richness of the original observances and acknowledging the Life giving power of the Sun and all that is represents as a symbol of the continuity of Earth Life. We live in such a delicate balance within our solar system with the odds of Life having occurred on our planet so astronomical that it can truly be considered miraculous! Multitudes of groups and individuals around the world work daily to raise awareness of breaks in the cycle of life and what must be done to preserve the equilibrium between human consumption and the diminishing resources of land and animals that play vital roles in the continued existence of this miracle called Earth.   (Please consider contributing to reputable wildlife organizations like the Sierra Club, Audubon Society, World Wildlife Federation, Defenders of Wildlife and of course the National Parks. You can request reports on the percentage of your dollar spent for the stated purpose versus ‘administration’ for any charity! https://www.charitywatch.org/home )

“Blessed is the match consumed in kindling flame. Blessed is the flame that burns in the secret fastness of the heart.” — Hannah Senesh

The miracle of Light is represented in the Hanukkah celebration of the eight days the altar lantern stayed lit despite the lack of oil available, emphasizing Divine intervention and the assurance that we are not alone in this ‘Earth project’. In physics, the term light refers to electromagnetic radiation of any wavelength, whether visible or not. Light, which is emitted and absorbed in tiny “packets” called photons, exhibits properties of both waves and particles. Whether it may result in a wave or particle is completely dependent upon the observer. So while many would classify the lantern as a miracle, there are many others who are realizing just how malleable our reality is and how rich creation energies are available to tap and use in order to recreate a reality closer to the ‘Golden Age’ or the Fifth world of ancient Amerindian prophecies.

“However young, the seeker who sets out upon the way shines bright over the world.  By day and night the person who is awake shines in the radiance of the spirit. Meditate, live purely: Be quiet. Do your work with mastery; Like the moon, come out from behind the clouds! SHINE!”                       The Buddha

These celebrations and ‘holy-days’ have come to symbolize Enlightenment, Lightness of Being, Transcendence and the ‘Christ Light within’ for those in the ‘New Age’ or ‘New Thought’ movement. Spiritually the presence of light as a metaphor of truth, good and evil, knowledge and ignorance, “Let there be light.”  “Let light be made”, is woven throughout human history. While powerful and life changing aspirations, Light cannot shine bright when the Shadow is large or looming over it. Or like Peter Pan when our own shadow escapes creating mischief or worse. Therefore we find ourselves in a time where all that has been held in Darkness/Shadow is being brought to the Light of Day – personally, culturally, internationally and globally as a species.

“I used to want to save the world. To end war and bring peace to mankind; but then I glimpsed the darkness that lives within their light. I learnt that inside every one of them there will always be both. The choice each must make for themselves—something no hero will ever defeat.”   — Diana, Wonder Woman movie

With the fireworks of the New Year we have reminders of the glorious illumination possible and the potentials available in each and every moment! Accessible to anyone who moves towards it and looks. Innovations and advances abound! Here is a resource of 99 stories that show some of the ways our world is better in 2018. https://medium.com/future-crunch/99-good-news-stories-you-probably-didnt-hear-about-in-2018-cc3c65f8ebd0

That is not to say we must in any way avoid knowing where, how and what is being threatened like our food, water, air quality, war ravaged peoples and human rights violations to name a few. But, any occurrence, story or statement that arouses an emotional response whether it be anger, sorrow, fear or hurt – always, always look within to find and follow the trail of that emotion to your personal experience of it and working to transform it, you automatically lessen some of its existence in the world thus creating a New World as you create a New Life for YOU!

May each and every one come to see and know the Radiance of your Being and the vital role you play in this Evolutionary Leap!

With the deepest of gratitude and love for you on your path,

Luminous
Out of the darkness that holds mystery and wonder
Emerges a light so bright that only the heart can contain its radiance
It is too vibrant for the mind to comprehend
And would only confound and blind the eye
This gift is more precious than diamonds
Shines more brilliantly that those gems
Is priceless and can never be lost
You need not search for it
Call it love, refer to it as magic, name it miracle
Know it for its ability to shift perspective and alchemically transform
It simply IS
We only ARE
Copyright © Edie Weinstein 2011