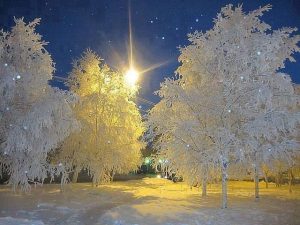 Greetings dear ones, hoping all are enjoying the midst of this holiday season!

All three major holidays, the Solstice, Hannukah and Christmas falling within a few days of each other mark a very powerful end to the year, the decade and most importantly the end of an era!  Known as the Season of Light from three different traditions, yet each tradition was borne out of the darkest of circumstances leading to great ‘Light’.

From the earliest of times, man feared an increase of the Dark. During winter as the night became longer and longer, early man whose lives were determined and directed by the seasons and cycles of the earth did not know whether it might continue until there would be only Darkness. Amidst a war with their temple under siege, it appeared as if the war would be lost and the Lamp representing God’s presence would be extinguished. And of course Herod wreaking terror and a threat of death over the people at the time of Jesus’s birth.

All extremely dire circumstances and looming over each situation. But the days did begin to lengthen, and the light grew with each passing day so there was great celebration that the Light and Life would continue! Despite the constant onslaught of an enemy, that which represented The Divine’s eternal presence stayed lit. And in the face of death itself (the killing of all newborn Jewish boys), the one referred to as the Light of the World prevailed.

Many are feeling that level of fear today as circumstances for the average or lower economic majority around the world are becoming more difficult. Bearing the brunt of a widely skewed economic and sovereignty based construct which allows for a very small group of individuals to hold the power, control of resources and ability to dictate the ‘lot’ of the masses. Freedoms and rights are being trodden upon by leaders who have come to power whether apparently elected or not. The unending assaults upon the Earth, Nature, Oceans, Land, Waterways, Air, and Food being reported daily and one’s own observations of the changes.

Old Souls are feeling this most acutely with symptoms and physical challenges. Unusual pains and aches in the body, particularly the back and neck/shoulder areas. While many do have chronic challenges in this area of the body, lately the increase in pain has become severe. Not surprising as this reflects a severe lack of ‘backing’ or support from those who one would ideally look to ‘to do the right thing’ and make choices for the greater good on behalf of those for whom they are supposed to provide a safe and secure world. Heart palpitations, arrhythmias or angina so clearly representing the pain and hurt felt by the harm and damage inflicted upon the ‘innocents’ be they human, animal or the Land by those who are supposed to want to care for and protect the ones who cannot defend or safeguard themselves. Sleep disturbances and insomnia resulting in a lack of sufficient dreaming and restful recuperative sleep, echoing the exhaustion of the constant onslaught against our peace and calm and subsequent lack of dreams and hopes for a better life and better world.

But if All is All, then isn’t Darkness Divine as well?   ABSOLUTELY!

For the above physical discomforts are mirroring the same sensations felt as children, with the same sense of powerlessness, having no control over the situation and those perpetrating them, and utterly trapped! For around the world leaders are doing what they want, elections are being influenced or rigged, ‘the people’ have less and less power and at the moment nowhere else to go from this planet!

But it has to reach these proportions on a planetary level of discomfort, to touch and affect not just some, but ALL people. Which is precisely why we are facing a climate crisis, why the threats to our very existence are more pronounced and the greed, money issues and power are being exposed! All those aspects connected to the 1st and 2nd chakras must be revealed for them to be changed.

Yet this is the ‘wholey’ beauty of the grand design. Our own wounded experiences compel us to resolve, transform and ultimately transmute these pieces within, evolving that which is without!! We absolutely DO have complete control over what happens in our lives. We are absolutely powerful in regard to our internal experience! And we are not trapped, we can go within to the entire universe!

This is the evolution of the species! This is the deconstruction of the old pyramidal construct of the very few holding the power and resources dominating and oppressing the masses. But the caveat is that we all must rise up in our own authenticity and power of the expression of our Essence, doing what we love and making the choices that our personal transformation reveals. Bringing us true Liberation! This is the end of an era, Piscean, and the beginning of an entire global and species reset! We are the Age of Aquarius!

With all my love and admiration for the significant and vital role you play in this Evolutionary process and in my life personally, and with so much love,

REMINDERS:   Thurs Jan. 19th, 7pm Group Long Distance Healing by Telecall from the comfort and warmth of your own home! Receive transmissions to address current physioenergetic issues with the power of the sacred geometrics of a group.

Facebook Fridays– Free Mini Healing and Energetic updates of what is going on Globally and Universally relating to and affecting your Individual Human and Spiritual Evolution. 12pm

Sat Jan 11th “Multilevel Multi-Self Reset”  11am-5pm Start the New Year with a Commitment to Yourself! Oftentimes challenges to our intentions come not only from within, but from the current human and planetary energetic influences. RELENQUISH AND RELEASE patterns held in your cells and atoms. RESTORE AND REVITALIZE to move easily and fluidly into the new. RENEW AND REALIGN your Souls purpose to coincide personal unfoldment with planetary evolution.