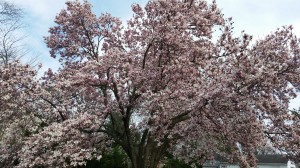 All living things have an intrinsic value, and each plays a unique role. We are in an unprecedented extinction of species. Come tap into the Earth energy imbued in the Labyrinth along with the wisdom of the animal teachers, the ‘creepy crawlies’ and the Lands that support them with Nature Magic to help reverse the tide!

What a magical time of year, Spring! In this area it’s like flipping a switch! Last full moon in Amerindian culture known as the Worm Moon, and within a day or so the robins were out pulling worms from the newly defrosted soil. The day just after the Equinox, a tiny little daffodil and crocus opened up right at the window to my healing space, and my flowering plum begin to bud. In China the flowering plum tree is the symbol of vitality through hardship and the hope that life will regenerate.

Nature has been seen as a source of information and symbolism in all the great ancient civilizations and throughout history. And while one can explain the facts of the process biologically and through natural science, there is something more going on if we know how to see and hear and more than anything feel the knowledge, Energy and Wisdom underlying the facts and figures. You may know the song from Pocahontas, ‘Colors of the Wind’ that so well exemplifies the attitude of man towards the Earth. The lyric ”You think you own whatever land you land on, the earth is just a dead thing you can claim”. This sense of possession and ownership has caused a disconnect not only between man and aspects of the Earth, animals, nature, but also between the underlying magical forces and beings with whom we were once very much allied and cooperated with in a mutually beneficial partnership.

Even those more caring and aware individuals recognize and appreciate the beauty and are upset by the harm and damage to the Earth but still not in communication, connection and collaboration with those forces and beings. Another line in the song says “we are all connected to each other in a circle in a hoop that never ends.” This is the Native American way of Walking in Beauty. For everything on and in and around and above the Earth is not only connected but is alive, has a level of sentience, ‘beingness’. As the song goes on to say “every rock and tree and creature has a life, has a spirit, has a name.” We have merely forgotten how to speak the language.

This language is heard and spoken through our deep sensing abilities which are unique to each one. And these sensing/listening mechanisms are in and through our bodies. For to speak and hear Nature and the beings of Nature and the Magical, you must tune in in a different way than most are used to doing. Many if not most people tap into information/guidance through their third eye, their higher brain, which is more often than not attuned to the electromagnetic frequencies or Light energy. But the Earth, the creatures, critters and aspects of the Earth like rivers, soil, and mountains aren’t actually on that range of frequencies. The earth is made up of magnetic grids, electrical grids as well as electromagnetic grids- all structures within the human body and Energy Field. Additionally the Earth and Nature function and are organized as/by many other Universal energetic archetypes such as Rhythm, Movement, Cycles, Sound. Time, Space, Harmonics etc. Rocks and Elves and the Undines don’t necessarily speak nice clear English sentences.  So one must learn how to sense or feel the information being transmitted.

This is not simply airy-fairy gobbledygook. Science is discovering daily the intricate complex intelligence through relational ways heretofore unimaginable from a science perspective. In a beautiful book called The Hidden life of trees Peter Wohllenben explains how trees live in a social setting, how there are actually tree parents and tree children living together, how they communicate with one another, share nutrients with those who are sick or struggling, warn of dangers, and form alliances. So when we clear-cut an area it is wiping out entire family units! Nearby copses of trees are aunts and uncles and cousins. Eliminating the old ones to bring in new easy to care for trees breaks down these social units and all the related animals, critters and soil that we need and depend upon.

Mushrooms are the telephone operators of the land. They have a Communication web made up of mycelium allowing plants to send information to one another in order for the area of forest or ecosystem to thrive. It’s like an underground internet.  Research has shown that plants are highly sensitive to sound and there have been many studies on the effects of melodious music versus heavy metal. Many people speak to their plants and see them thrive as a result. It has been presented by a Nobel Laureate that water has memory and other countries are following suit with studies of how water is affected by cell phones and can hold information. In some ways water defies the laws of physics that govern other elements of the Earth. While science is likely still in its embryonic stage regarding not only characteristics of Nature and the Earth, but certainly so in the sentient inter-relational aspects between and among the natural world and between and among humans and the natural world.

One group of people whose work has become an NGO associated with the UN learned how to hear the “over lighting intelligence of plants”. And when out of necessity, despite the dry and sandy conditions of the land, ended up growing huge plants, herbs and flowers including legendary 40-pound cabbages. One of these three people was Eileen Caddy who begin to tap into the interconnectedness of life and listen to the Divas of nature and with the other two people founded Findhorn in 1962, which to this day yields astounding crops and flowers. Of course this Divine intelligence has always been there as have many other types of nature spirits, a knowing which actually formed the basis of the Shinto religion dating from the 8th century and the state religion of Japan until 1945. Right here in Virginia another amazing cutting edge ‘Garden’ was co-created by Machaelle Small Wright, at the direction of Nature. Perelandra is a metaphor for all life and a way of cooperating and collaborating with Nature Intelligence to fashion your life and our world!

But it is the unique and significant way in which each individual connects into and evolves this relationship with the Earth which fires my passion and elicits such deep reverence for their chosen path. For it is born out of the very ‘issues’ which challenge us, relating back and through our primary woundings which lead us, like a map to not only a profound, loving, intimate, respectful, joyful relationship between self and Self, but our own unique flavor of relating to specific aspects of the Earth and Nature and the Divine therein.

Just this week a client who was experiencing restriction and disengagement from being able to walk on the earth and be with Nature as she normally does, due to a recent surgery which kept her confined to her 3rd floor condo, was reverted back to the same sensations of childhood. As a child she felt the most joy and belonging when outside with and on the Earth and feeling/interacting with trees, flowers, the sun and wind tapping into her Native American Spiritual lineage. Her mother not only did not engage with her in this expression of her Essence, but seemed to take great pleasure in negating, squashing and ridiculing her most natural ‘way of being’! My client as did her siblings, further experienced a lack of family and belonging. As she transmuted this piece she came to have an embodied sense of ‘all her relations’. Like the Native American way of being wherein one is related to everything on, in, above, below and within the earth. She not only reconnected to her Essence, but was infilled with the joy of Life and a renewed commitment to stay here and express that Essence in communion with her many ‘relatives’. Truly then Walking in Beauty so that they too can express their Essence with her!

Another client healing the abandonment/disconnect he experienced from his mother learned to ‘abandon’ himself by being out of his body energetically and continuously seeking an unrequited love from a former girlfriend. Transforming this he was able to re-imprint his relationship and connection to his self and moreover his Self. In this way he was reconnected to the Earth Mother allowing him to channel his gentle nurturing spirituality to and with all things of the earth including a deeper relationship with other people and potentially a girlfriend who relates to him at that level. But more importantly to now have the ability to turn to Mother Earth for the nurturing and caressing he desires at any moment!

A client who is accustomed to doing everything on her own and by sheer will and surrounded by people on whom she cannot rely/depend, feels she cannot relax into the Divine intelligence and co-creation available to her causing her to constantly struggle and work at an exhausting pace. Working through this she was rebirthed into her ancestral lands in India with the lushness, and easy abundance of bountiful and rich soil where the Land gives, supports and is dependable for all the inhabitant’s needs and more! And as she lives from this internal sensation and Innate guidance, the effortlessness and ease available through this profound co-creative dynamic between Earth and her dreams/desires become reality.

These are but a few and in very brief the potential of our inherent connection to the Earth, aspects of the earth and the Beings and Beingness accessible in this deeply intricate and intimate relationship with this planet, Nature Intelligence and the magic potential of reconnecting with our self, our Self and the Divine within all things through our Soul purpose.

Please join me for an exploration into “Natural Magic”: What the Ancients called Magic, we now call Science. We are moving into a time where there is no difference and when blended can be utilized to construct the world we desire personally and globally.

Learn how to access your unique way of creating.

Learn how to Connect and Communicate more efficiently with your ‘Helpers’.

Learn how to Cooperate with Earth Law and Nature Spirits in Collaboration with Architectural Devas and the Hidden Folk.

Learn how to ‘Spell Out’ your Dream Life and how to ‘Draw’ it to you.

We will meet once a month for four months for 2 hour classes which will include a meditation practice infused with Energetics that you can use daily; experientials which will allow you to truly feel what you learn and practices and exercises for Homeplay!

If you are more inclined to explore individually, I am offering packages of three 75min “Alchemical Reconnection” sessions $75 off coming to a little over $100 each. They can be scheduled out over the months ahead or more closely grouped.

My wish and prayer for all during this powerfully spiritual time of Easter and Passover is the reconnection to YOUR essence and thereby the Divine of you and the Divine in ALL things!