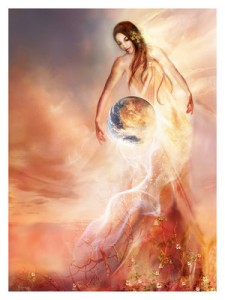 “Mother Earth is the divine sacred feminine and is wisdom, justice, beauty, and compassion for as long as humanity has walked upon her. She is the irresistible power that destroys old forms and brings new ones into being. She is the healer and nurturer, she is the creative force that resides within both female and male. She is warmth, radiance, and beauty. She is the power that creates life and the force that can take it away. The Divine Feminine is the unseen dimension of ourselves to which we connect to all things within the web of life.” the Avatamsaka Sutra

Over the past month the Current Collective Consciousness Theme has been the ways in which the negative masculine response to natural and primal feminine sexuality has distorted and damaged the Feminine Force in the world individually and historically.

Although this was part and parcel of the design to fully explore earth’s particular form of separation within a Male dominant construct, it can be and is excruciatingly painful in the individual experience, ranging from incest to sexual harassment and innuendos.

Yet this pain is the Divine compulsion to seek and find a way to transform it in our individual lives to reclaim the piece of ourselves lost in the wounding process and own that sexuality and power over our own bodies and lives. As each women does this in her own unique experiential variation on that theme, the species evolves.

Throughout history women have been ‘forced’ to disconnect and shut down their Essence (expression of Soul Self in the world), their power to combine with Nature to manifest and their Innate Knowing, as a matter of defense. Born out of a world that was lawless and full of physical dangers in which a woman and her offspring were utterly dependent upon the male for protection and provision. Survival required this sacrifice even at the cost of her Being and in many cases, her children’s wellbeing.

The masculine way has abused, vilified, taken advantage of, made wrong, dangerous, and evil feminine power and sexuality in order to oppress, maintain supremacy and control. Not only over women, but in the pyramidal structure of the world with the few holding the power and possession of resources. (Women and their ability to produce offspring being a vital resource!).

But the game has changed! Last August’s blog on the Eclipse cited it’s far reaching effects on the healing of many polarities and the Male/Female with all its many aspects being a prime one for the Earth. As I was writing this an article came across my desk with a video taken of the shadow of the eclipse moving over the United States perhaps indicating the shadow side of this polarity changing with the US being a forerunner? Watch it here! https://www.youtube.com/watch?v=eTN50Qnzh6Q

We are moving into a time in which women can provide for themselves, are able to protect themselves (in a variety of ways) and can even have children without the need of a mate. Women’s survival no longer depends upon the male. This has opened the path for the Feminine Force to be physicalized enabling the rebalance of the two prime forces at an evolved level.

For this rebalance is vital within men as well! The repression and negation of the feminine qualities of empathy, compassion and receptivity to the Intuitive and Innate must transform so that these aspects become part of the approach to the affairs of daily life. In Amerindian cultures a man cannot rise to be chief unless he has developed his feminine side as well as the warrior. The assertiveness and action of the male aspect on the part of women is seen on the larger stage in the many women ‘standing up’ and speaking out about harassment experiences and suppression of their voice in a variety of settings by powerful men. While there may be a long way to go the lid is off and cannot be put back on!
Clients, friends and colleagues have been experiencing this Theme in the various distorted encounters between the men in their present and past relationships (beginning with ‘the first one’), which have come to the foreground to be unraveled, felt, and transformed. This has resulted in reconnection with their Innate Wisdom and Internal compass for guidance and Divine support in the fulfillment of their passions in the world. (Alchemical Transformation sessions discounted this month http://healersuniverse.com/contact/ )

As we each continue to explore and transform our relationships with the men and women in our lives, the initial woundings/issues reveal more and more subtle ways in which the masculine and feminine distortions appear in our personal family’s lineage, in our cultural heritage as well as the way in which man relates to the Earth (male to female) and the within the species as a whole

This ultimately leads to an ever deepening embodied sense of Self as a Divine Being and of Connection, Communication, Collaboration, Cooperation and Communion with one’s own Essence which automatically brings Connection, Communication, Collaboration, Cooperation and Communion with all things around you physicalizing the Feminine Force on the planet. Naturally engendering a profound KNOWING of the protection and provision inherent in this evolved world – a NEW REALITY!

Please join me on Fri May 18th at 7pm for Deep Transmissions of the Energetics brought forth by these courageous Trailblazers along with group experientials to help “Birth Your Creativity through the Cosmic Mother” (see schedule page). We will be calling upon the many Feminine representatives throughout human history and in all Her many forms, and helping you to find which Feminine Goddess/Being who is working with you or that you are embodying at this point in time.

Heads Up: June’s event will catch the powerful Solstice Energies on Fri. the 22 of June at 7pm as we bring in the Native American way “To Walk in Beauty” using deep ceremony through the Labyrinth and other honoring practices.