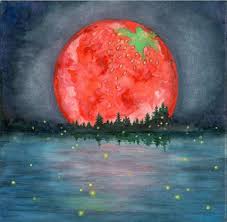 Hoping all are enjoying this start to summer heat and fun!

The Solstice which marks the start of summer on June 20 this year also coincides with the full moon which will not happen again until June 21, 2062, if using UT or Universal Time, previously known as Greenwich Mean Time. As many are aware the Solstice marks the longest day of the year (coming from the latin “sun standing still”). However this is also a full moon which for some native American tribes marked the Strawberry harvest and since relatively short was greatly revered. In Europe it is referred to as the Rose moon since the strawberry was not native to Europe. Approximately 20,000 are expected to be celebrating at Stonehenge.

Here in the US near Collinsville, Illinois are the Cahokia Mounds from the Mississippian tribes which flourished from about 700 CE to 1400 CE, and was once one of the greatest cities in the world. Archeologists have identified what they call “Woodhenge” a calendar of wooden posts arranged to line up with sunrise on the longest day of the year, the shortest day and on the equinoxes, when day and night are equal in length. Some will gather there, but out of respect there will not be any ceremonies or rituals.

The Solstice and Full moon on the same day is rare, but astrologers are noting other alignments and cosmic energies. It marks the fourth of four full moons in between the March 2016 equinox and the June 2016 solstice. Usually, there are only three full moons in one season so this is referred to as a Seasonal Blue Moon. “By landing exactly on the solstice, this Full Moon doesn’t just rise as the Sun sets but is opposite the Sun in all other ways too. The Sun gets super high so this Moon must be super-low.”, the Old Farmer’s Almanac reports.

With this Full moon Solstice we can feel the influence of the Water energies of the Moon juxtaposed to the Fire energies of the Sun, celebrated in many traditions at the summer solstice. There were fire dances, bonfires, and in the olden days, the ancients rolled fire wheels down the hills. The Full Moon is also known as a time of getting rid of old ways, beliefs, habits and objects that just don’t serve us anymore. There’s also a long tradition of ritual bathing, dipping in the cleansing waters.

So this is a great opportunity to ‘burn off’ our anger, resentments, prejudices and judgements (about ‘they’ and ‘them’) or grudges by writing them on paper and burning them outside if you have the space or inside in a fireplace or even and old pot. As the smoke rises we can access the powerful creation energies of the Central Sun of the Central Sun of the Universe energizing the prayers, affirmations and invitations of what we want to create in our lives.

There are also many ways we hold some shade of these same thoughts, feelings toward ourselves. A powerful cleansing ritual for this can be writing the statements we make to ourselves and bodies with an eyeliner on our bodies then washed away in a shower or tub. Then by Moonbathing either outside or allowing the moon to stream over your body through a window to reenergize while stating loving accepting and understanding statements to our bodies and human self.

According to Nick Anthony Fiorenza “The Full Moon occurs on June 20, with the Sun conjoining the Gate of Man in early sidereal Gemini with the Moon conjoining Quaoar and the Gate of God of Earth’s Precessional Cross in early sidereal Sagittarius. Discovered in June of 2002. Quaoar was the name given to the “creation force” by the Native American Tongva tribe. Quaoar’s near circular orbit and mild orbital inclination imparts a more gentle and harmonious energetic, perhaps one inspiring the need to bring harmony and balance into that which is chaotically scattered and in conflict.”

Perhaps the opportunity is to bring in to harmony the polarities and dualism within ourselves and our world. The masculine energies of the Sun and the Feminine Energy of the Moon; the ‘doing’ represented by the sun with the ‘emotional’ influences of the moon. The fiery with the cooling! The Light with the Dark. Lately we have had many opportunities for both to be revealed! Let us always begin with Self, which automatically then allows for the open hearted compassion and acceptance to extend as does the warmth of the Sun and flow over as the illumination of the moon.

The last time this alignment occurred it was 1967, ‘the Summer of Love”, let us have a love fest with ourselves, Nature and our bodies and the Earth. Also of note, as the moon is so low in the sky, this forces its light through thicker air, which also tends to be humid this time of year, and the combination typically makes it amber colored. This is the true Honey Moon. Let us begin the Honeymoon tonight!