As I sat contemplating International Woman’s Day on March 8th, 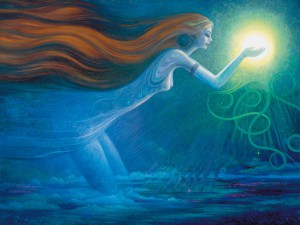 I thought I might share some things that have been showing up in the current energetics. But, first a bit of background pulling from memory of a paper I wrote and subsequent years of reading and study.

Thousands of years ago a shift took place wherein the focus of power moved from an earth centric feminine alliance with Nature, and an inner knowing with links to invisible forces that could guide and show the way for the tribe to a male oriented power based on dominance by brute force, the accumulation of earths resources and the subjugation of the ‘weak’ through conquest.

Women’s way of interrelating, sharing of resources and knowledge and their deep connection to the cycles of the earth and cosmos and the ability to foresee or ‘know’ beyond the physical world became a threat. This gave rise to a variety of stories and lies about Wise Women being evil enchantresses and women in general as seductresses that could corrupt and destroy a man’s strength.

Yet, if the feminine way had prevailed with connectivity, sharing, sensitivity and compassion, we would not have had the opportunity to explore the game of separation and duality we all so cleverly designed from a soul basis. A game which we have played out to the nth degree bringing us to the ultimate level on the largest possible scale-Nuclear War. Since this could only result in self destruction, we as a species on the deepest of Soul levels decided (the Harmonic Convergence of 1997 and confirmed again on 12/21/12) on a game change! We are in the midst of that shift back to the feminine way now. A way prophesied by many Indigenous people around the world as the end of one time and the beginning of another. the ise of the Condor instead of the Eagle ultimately to fly equally in union and equilibrium.

In indigenous traditions the masculine and feminine traits are honored in the earth and the sky, the sun and the moon and various aspects of nature understanding the creation process from the largest scale down to the smallest. In many Native American tribes a warrior cannot achieve full status unless he has exhibited the skills of intuition, visioning and dreaming on behalf of the tribe. He most certainly could never take the place of leader or chief unless he had developed this side of his being.

This is ultimately a question of balance. Balance between the masculine and feminine qualities in each of us both men and women. In recent decades “in our society women have taken on the traits of men in business, in their family lives, and in their personal relationships. They felt it was necessary to compete in a male dominated world. They’re tired, angry and frustrated. Men feel emasculated, causing relationship issues and impotence. They have yearned for a missing part of themselves, the feminine, to return”. (Doris Sanders, PhD)

While male dominant, ‘power over’ suppression and control is evident in religions, governments and cultures, what has been showing up currently are the ways in which women abandon themselves, turn their backs on and distort aspects of themselves in order to seek the protection and provision of a man or male representation. While men tend to suppress, deny or distort their artistic, creative characteristics as well as intuitive abilities for financial status and societal acceptance.

I invite you to try any combination of the above or ideally your own key words and phrases within such an equation based in your own childhood experiences. Notice how we each compromise parts of ourselves to gain the protection and provision of parents initially, later spouses, partners, and bosses, organizations we belong to, our culture or cultural heritage or society at large.

We are also evolving millennia steeped in the absolute necessity for protection of women and ‘the weak’ by the physical strength and weaponry of men and/or overlords from enemies, marauders and other physical dangers. And women have always by nature compromised themselves for and on behalf of their children.
But now given advances in laws and technology and the freedom to earn in this country, that type of protection may no longer be needed, yet we still seek it unconsciously through our childhood wounding provoking us to discover the underlying pattern and how it is connected to the overall human evolutionary trajectory.

We have the opportunity to delve deeply within our own emotional makeup to not only transform these patterns out of our present day lives, but when accessed at their core transmute them in such a way that we change it within our family genealogy, our cultural lineage and our species.

Some Essential Oils I would suggest would be Ylang Ylang for balancing feminine/masculine energies; Gathering to bring in the qualities you desire and Jasmine to allow the sweetness of Being.

Join me on the Total Lunar Eclipse Equinox on Fri. March 20th at 7pm revealing aspects of the feminine within and elevating the evolved masculine bringing balance to your world within and our world without. We will be doing various exercises and practices including a profound tantric sound meditation
Please call to register 856-904-5566 $25 before 3/17 $30 after

Be well and happy always and in all ways, Andrea