Hoping all are having FUN in the SUN! 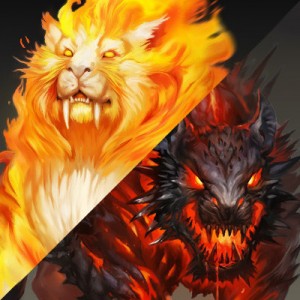 This is a month where the Element of Fire is loud and proud! A seasonal point in which the temperatures in the Northern Hemisphere are at their peak, and the Sun is at its brightest. The ferocity of Leo’s Lion brings cosmic fire and we have had the added energies of Mars, which has been prominent for weeks. All combining for a profound experience of multiple facets of the power and influence of Fire.

We see Fire’s double nature: creation and light on the one hand with destruction and purification on the other in our individual internal journey as well as on the external global stage. The ancient Greek philosopher Heraclitus named the “upward-downward path”, a “hidden harmony” or series of transformations he called the “turnings of fire” to describe the way in which the Elements could mutate one into the other with fire being the source Element for all.

We are currently in the midst of a planetary heatwave never seen before with temperatures higher than ever recorded on the planet. Fires are raging in many countries with forecasts for potentially more given a variety of factors, many man made, that endanger vast forests that are vital to the survival of humans. Must we be pushed to the edge until we change the way we live and interact with the Earth and all its creatures inclusive of the flora and fauna? Or is this part of the process of purification the earth herself is going through in order to evolve? Can this also be said of us in our individual evolution? Are you feeling pushed to an edge regarding some aspect of your life or way of being? What appears to be destruction from one angle can actually be purification from another.

With Mars closer and more visible to us, the planet of war presents the many warring factions within us and the world at large. An excess of fire in our system or anger that hasn’t been transformed, can be repressed for only so long without its effects on our body manifesting in physical dis-ease or the need to utilize ‘assistance’ in the suppression process from drugs, prescription or otherwise, alcohol, food and a wide variety of means to prevent the anger from being felt. The fears of allowing that anger to be touched or voiced are real to the child that must do whatever it takes to survive. For he/she cannot actually express the depth of rage inside fearing that it may result in loss of the source of his/her shelter and sustenance. Or worse still to feel the desire to get rid of the one(s) he truly loves. The anger stemming from the absence of some form of the many secure attachment patterns vital to a child and he/she has no power or control over how to ‘make it’ occur. For when we are not feeling secure there is most often anger at what seems to be causing that unsafety.

All humans children go through these stages of basic primal, instinctive needs and desires which when not met create a ‘stuck’ point which inhibits growth in the corresponding psycho-emotional and psycho-energetic aspect of their natural True Self.  This is almost always the case as generally the parent was lacking in that aspect of themselves. A ‘looping; then occurs with the child within continuously seeking to have that need/desire to be met, but seeking it from the same ‘type’ as the original model, with the same results. While this may seem a foredoomed situation, it is actually the perfectly designed map by which through its transformation he/she not only retrieves that piece of their human self trapped in that time/space, but coming to have the regard, caring and valuing of self to want to provide that safety (emotional, physical, spiritual or energetic) for oneself and in turn actually experiencing the ways in which it is always available from aspects of the Earth, Nature and the countless other forms of the Divine. An increase in creativity and passion as well as the sense of personal internal power is embodied. One’s whole perspective of the world, how it works and most importantly who you are in relation to it has transformed.

This is the catalytic power of the Fire Element being so pronounced at this time. For the Human species is evolving its developmental stage from that of the primal, instinctive lower chakra based drivers and demands feeling scared and insecure, with the corresponding realizations that ‘those in charge’ are not doing and being what ‘they’re supposed to’ and the ensuing anger stemming from the sense of powerlessness to make it different.

With the added benefit of fiery Mars to help spur the process. For like all planetary bodies and its correspondence to the human journey, it has both beneficial and adverse effects. Nick Anthony Fiorenza states it this way “Planetary harmonics govern natural long-term biological growth patterns, monthly and yearly biological processes, and daily brain and psychophysiological function.” Here are those which Mars can provoke: “Denial, unconsciousness, survival issues, sexual and control issues. Judgment of other’s creativity, use of raw power, sexuality and or one’s carnal nature. Powerless, inability to create act, or respond. Inability to stand erect, no backbone. Oscillations from wealth to poverty. Inability to discern or see manipulative energies. Need to exploit, manipulate or control others or one’s environment for personal gain or one’s sustenance. Overbearing, contentious, domineering. Hate, greed, brutality and jealousy. Sexual abuse issues.” But of course none of these are visible in our current affairs! 😉

Mars has always been a representative planet for the masculine whose “Shadow masculine energy erupts as violence, war, abuse, domination, manipulation, and control, which are sustained by systemic conventions and rules.” Guru Rattana. Yet, this is the aspect of humanity that we are in the process of evolving so like many on a path of mastery, we are being pushed to an edge in our personal lives to respond to those shadow pieces within ourselves and with which we have been imprinted as children. Once transformed we express the higher forms of the masculine energy as one nationally recognized astrologer words it: (1) consciousness and the stability and non-judgmental perspective of the neutral mind, and (2) our ability to operate from this consciousness for the higher good of all. It also represents (3) the fearless ability to stand for the truth, (4) the illuminated mind that has access to universal wisdom, and (5) the ability through who we are to invoke trust and respect” NMBeing Aug/’18

Aiding us in this venture are not only the positive aspects of the Fire element, but the Elemental Being the Salamanders on whom you can call for guidance and direction. As well as the more beneficial features of Mars as an initiating and creative force “to enhance creativity, sexuality, vitality, life force and self-expression. Enhance ability to use creative power, to initiate action and the capacity to respond in assertive and audacious action. Enhance leadership skills, self reliance and self-confidence; and capacity to be brave, instinctual, passionate and willful. Young living essential oils that can stimulate and augment the exploration are: Light the Fire!; Motivation; Life of Passion; Magnify Your Purpose; Dragon Time; Fulfill Your Destiny; Journey On; Live Your Passion and others! (Contact me for a personally tailored read or follow your guidance http://healersuniverse.com/essential-oils)

For it is my deepest knowing and experience over decades with clients, colleagues and friends that the depth to which one transforms, and if your soul has so chosen to transmute these characteristics within ourselves, we are then able to channel in the gifts, abilities, knowledge and energetics form other existences of our soul. This is the true process of soul retrieval and the far reaching effects which evolve the very fabric of this earth project.

This Earth Journey is meant to be one of exquisite interrelatedness, interconnectedness, and interdependence and to that end I am offering several groups this Fall so that the members can benefit from the combined power and diversity of what each member brings to the sacred container in an alliance for personal evolution thereby creating Planetary Evolution. The groups will range from introductory level to learn and develop your Energy Field and recognize and respond to the energy of others, your environment and the Earth itself –“Ground of Being Magic”. For those a bit more familiar with and or have experience working with me and the energetics in sessions entitled “Practical Magic” and for those who are more advanced in utilizing Energetics and/or Professionals (Healers, bodyworkers, Practitioners etc.) the “Magical Mystery Tours” classes will enhance not only your ability to move in and out of other existences and places on/in the Earth, but will focus on EarthKeeping Projects. Each class will meet once a month at a regular set time unless an urgency calls for a group meeting by Teleconference. The information will be up on the schedule page http://healersuniverse.com/schedule/.

Be well always and in All Ways!

0 thoughts on “Fire Element, Mars and your Soul”